Today was a special day as we had a full house for breakfast. All the Foundation staff joined us for breakfast. It was wonderful to interact with them and they also shared our devotional time.

We heard about a farmer and his hired hand. The hired hand said he could sleep through the wind and the storm. When tested the farmer could not wake the hired hand, and in anger he went outside to secure everything. When he looked around everything was already secured, so that nothing could blow away. The farmer understood what the hired hand meant and he also went to sleep while the wind blew. The moral of the story was that when you are prepared spiritually, mentally and physically, you have nothing to fear, and could “sleep through any storm.”

Joining us for the day today were Juan’s parents. Juan’s father, Dr. Paz, is a radiologist. They brought a portable ultrasound machine and primarily evaluated expectant women. They also performed exams on any other persons referred by the medical clinic.

The team visited was El Cerron today. The community has 98 houses with 105 families. They have indoor plumbing, electricity and a water fountain near the community. Their school enlists 125 students. The majority of the population still cooks with wood burning stoves, so a major health complaint is respiratory issues. The total number of patient encounters was 586. General clinic saw 319 with 2 referrals to the FOB’s Extended Care program. Dr. Roberto consulted on many patients today.

Jessica thought that it was a sicker group of people today and she learned a lot. She gave her cross to a boy with a chronic skin condition that he will have throughout his lifetime. Mario, her interpreter and medical student, encountered a boy with half of his face paralyzed. He thought everyone worked well together and did a great job today.

Dr. Reddy treated a man who brought his baby to clinic, a rare occurrence. The baby had pink eye which was treated. She also treated a young boy with cellulitis around his ear. She said that it was a busy day. Juan, her interpreter/medical student, said it was a tougher day. He admired the honesty of the man who brought his son to be seen, not want anything for himself.

Dale treated a baby that she wanted to take home with her, but as in previous years Shirley denied her request. Dale stated that she was very busy, but enjoyed it. Carlos, her interpreter/medical student was “fired” twice today, but quickly re-hired. He said that he had an interesting day. He heard a murmur on a young girl, who is already in the program. He called his fellow student, Nilia to hear the murmur too.

Linda liked having Michelle stationed in the middle, as she could call on her for help. She commented that the members of the community came to clinic, dressed in their very best clothes and with jewelry. She saw the whole range of life; her first patient was 85 and the last was 6 months old. Carlos, her interpreter, thought this community appeared better off than Monday’s; however the severity of illness was greater. There were lots of “social diseases,” Carlos commented.

Yolanda saw a patient proudly showing the ultrasound pictures of her baby. Yolanda explained to Nilia, her interpreter/medical student, what was in the pictures. Yolanda also made 2 referrals for uncontrolled diabetes, and a young girl who had enlarged tonsils that made it difficult for her to breathe while sleeping. Another patient seen was a 19-year-old young woman with a 1 year old; this mother had just lost her husband a month ago. Nilia said that she felt that the team did a great job, even though it was very busy.

Michelle, Tariq and Pedro worked the pharmacy again today. They were kept very busy since the census was much higher today. Michelle set up a much needed ear cleaning station in the middle of the room. One patient was so feeble and arthritic that it was difficult to position her to get her ears washed. She also had a young girl who had so much pain in her ears that she would only allow her to finish. Tariq said that he would have dreams and nightmares of Prilosec and Benadryl running through his head. Pedro, the Honduran inventory coordinator, said that he is thoroughly enjoying the relationship with this team. He said that it is a beautiful team which reflects on the great leadership. He thanked everyone for all that they are doing. He said that he could see the joy as everyone went about caring for the patients.

Shirley said that she observed more sick patients today than yesterday. She said that she was happy that every patient that God sent our way, were seen.

Donnie commented that the numbers were busy, with a long line waiting to be seen. He observed 2 little girls who received 2 different kinds of candy. After opening the candy they shared with each other without being told, something he has not often observed back home.

The deworming clinic was run by Lee, Peggy and Chanel (interpreter). They did 91 deworming, 33 Vitamin A and 16 fluoride. Lee said that the facility was nicer and cleaner today. They doubled their deworming numbers. They had a lot of young men who were coming in for their first treatment. Peggy also observed that they did a lot more deworming today – almost 100.

The dental clinic saw 39 people with 55 extractions. Susan said that they had a few more extractions today, but had more suturing of the gum line as many teeth were in the same area. Katie said that they had great team effort, effortlessly switching duties back and forth. Dr. Arita’s light malfunctioned so do suturing was done by flashlight. This meant all three of them were tied up with the 1 patient simultaneously.

The eye clinic saw 31 patients. Evelyn said that they saw a lady who she thought was about 72 years old, only to find out that she and her spouse were both 79. Evelyn was touched by this woman and gave her cross. She reluctantly had to give a man a pink pair of glasses that had sparkles on it. He had no problem with them, he was just happy that his vision was so improved.

Our guests, Dr. and Mrs. Paz, did 26 ultrasounds and were happy to report that all the babies were normal. He did find 1 baby who was showing smaller than dates. He said that the mother was an older person with malnutrition. Dr. Paz also commented that he found many patients with fatty liver disease and 1 patient with clinical hepatitis. He found 2 women with ovarian cancers and they were referred to the hospital.

The team had a very busy day and ended it with the devotion about two horses; one was blind. The handicapped horse knew where his partner was, because it wore a bell and the handicapped horse would follow the sound. He knew that his companion would take care of him. The moral of this is that sometimes we are the blind horse being guided and other times we are the guide horse helping others to find their way. We need to listen for each other’s bell.

A Visit to Friends of Barnabas

A New Friend of Barnabas

A Mile for Kyle

FOB Welcomes Back a Friend 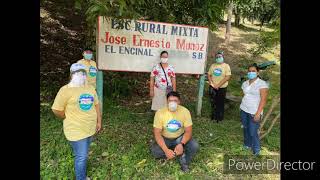